Editor’s note: The first marathon is always a memorable one and as such I asked my sister, Sarah if she’d like to write something for Let Her Eat Clean. A beautiful piece I’m only too happy to share here. Enjoy, Kleenex at the ready… 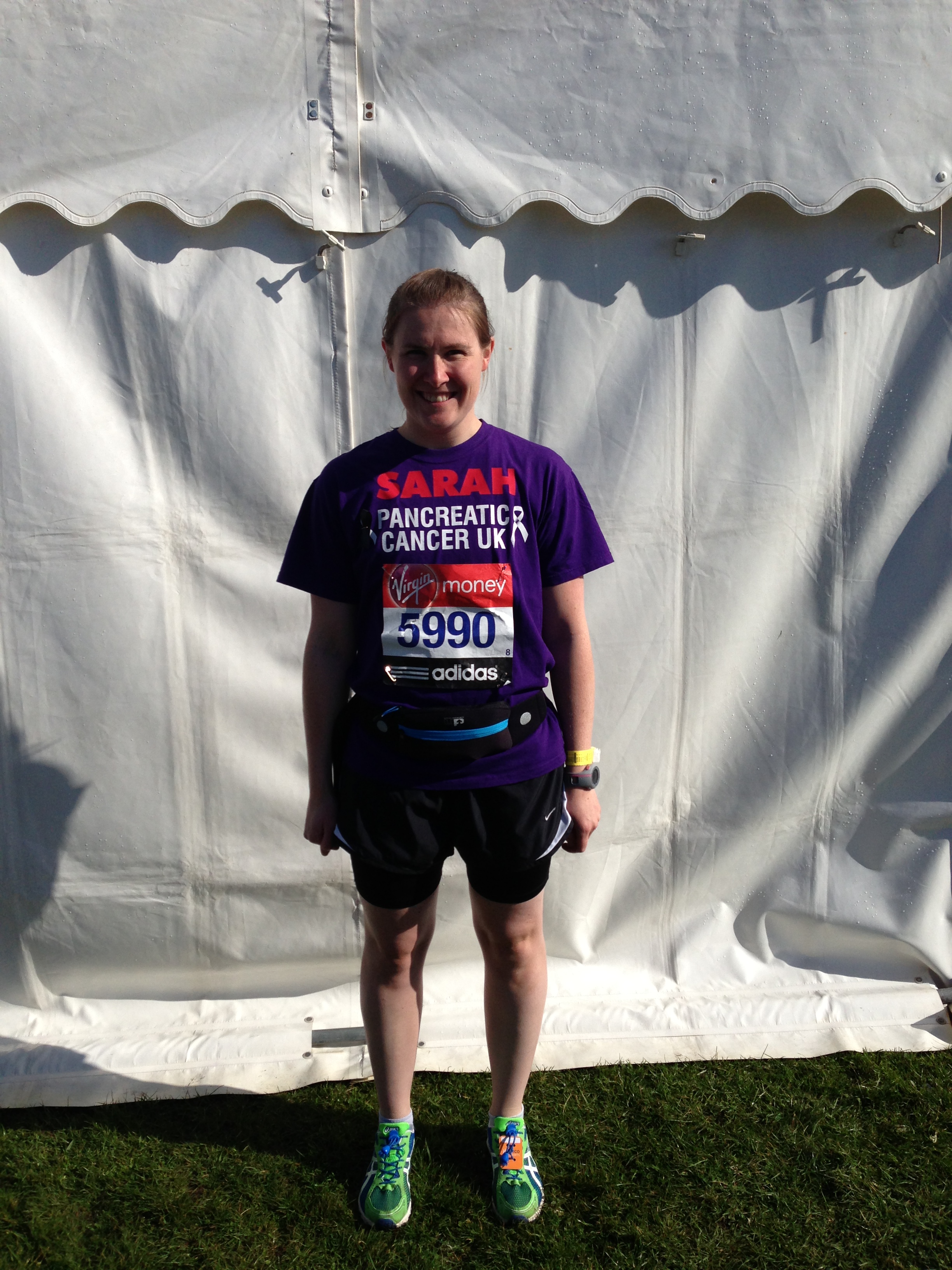 Running the London Marathon has always been a life long ambition of mine. Growing up it was an annual feature in the Walters household, always on the TV and an event that pulled on the heart strings year after year. I remember watching the Mini Marathon as an eight year old and desperately wanting to be a part of it. I always said that one day I’d be there.

But when my time eventually came at the age of 27, I had become the reluctant marathon runner. I was no longer the wiry 13 year old that enjoyed cross country and 800m races. I had spent the last 14 years playing team sports, having the comfort of others around me, knowing that we were all in it together. Now I was all alone. It was me against the clock and my wobbly mental strength.

Training started properly just after Christmas. I was to follow a training plan based on Crossfit and HIIT principles which would thankfully mean that my longest weekend run would be only 12k (with a one off half marathon scheduled for early March). Although my weekly running total was only around the 15k mark, I initially hated every minute of it. On my allocated running days I would sit on the sofa in my kit with a face like thunder, dreading the run that awaited. But on the 15th January 2013, that all changed. My Mum sadly lost her battle to Pancreatic Cancer and passed away. I was no longer just running to raise money for Pancreatic Cancer UK, I was also running in her memory. It put my running hate affair into perspective and I thought it was about time I just got on with it.

Don’t get me wrong, I still did a fair bit of moaning throughout the four months and I can’t say that I  totally rekindled my childhood love affair with running. But the weekend runs became slightly more enjoyable and I felt fitter, stronger and faster than I had done in years. They say marathon training can be a lonely process but with the fantastic support network of  My Momentum, Celtic Crossfit, my fellow marathon runners (Ruth, Andy and Nikki) and my very long suffering boyfriend (Will) I was beginning to have a good time.

So this time last week I lined up in my allocated starting pen alongside my second arm (my sister, Ruth). We hadn’t planned on running together but it felt like a fitting tribute to Fi and after the 7 weeks we spent back in Newport during December and January, a time which changed out relationship forever, it just felt right. I’m not married and I don’t have any children so I can safely say that Sunday 21st April 2013 was the best day of my life. The London Marathon is an awesome, although slightly painful experience that will forever hold so many memories:

The Blue Start Zone: The buzz around the starting pens, the nervous/excited energy, the sense of defiance following the tragic events in Boston, everyone with their own story, their own reason for being there. Stuff to truly make the hairs on the back of your neck stand up.

Mile 6.5 – Greenwich and the Cutty Sark: I couldn’t help but smile. The amount of times Mum and I watched the elite athletes on TV run past this iconic landmark. I had finally made it! I wish I could have shared it with her.

Mile 9 – Surrey Quays: The first sighting of my Dad and Will. Thankfully I was too focused on picking up my energy gels to get emotional but being able to share the day with them meant the absolute world to me.

Mile 12.5 – Tower Bridge: The noise, the support, the huge sense of pride. Another level!

The Half Way Point: Before Sunday this was the furthest I had ever run. I was officially entering into the unknown. But I felt good, strong and was well on target to hit the sub 4 hours and 30 minutes dream.

Somewhere around  Mile 18: Ruth was carrying an injury and we had agreed before hand that I was to go on without her if her back wasn’t up to it. She gave me the nod around mile 18 and I was to head on alone.

This was tough. Alongside Will, Ruth has been my rock throughout Mum’s illness and the build up to the marathon. But an agreement is an agreement, and I was to face the last 8 miles without my second arm.

Mile 19.5:  People always talk about “the wall” at Mile 18 and I was feeling quite smug with myself after passing through Mile 18 without too many problems. However, I would not escape. I don’t think I hit “the wall”, things just started to get quite painful. My hamstring and calf muscles tightened and my pace slowed. By Mile 21 the 4 hours 30 minutes dream was dead.  My hamstrings felt as if they were going to snap and I just physically could not run any faster.

Mile 21 onwards: The Lucozade pacing band was symbolically torn off my wrist, I gritted my teeth, got on with it and really enjoyed the crowds over the last 5 miles. I saw friends, family, work colleagues and strangers all shouting my name. I waved, smiled and ran as quickly as my legs would allow. I even managed a little ‘sprint’ along The Mall.

I crossed the finish line in 4 hours 40 minutes and 6 seconds; 10 minutes away from the dream and 35 seconds slower than my sister’s London Marathon time of last year. But I can live with this. As I collected my medal I knew I had given it absolutely everything – Ruth will vouch for this as she was the one who picked me up from the floor after she had finished! This whole marathon experience has been about so much more than a time. I have improved my fitness levels immeasurably, addressed my own health issues by improving my diet and nutritional awareness. But most importantly it has been for a great cause, in memory of a great lady and is something I will never forget.

Thank you for all the support and sponsorship. Fi would have been proud.