I’m sat in the biggest bed in the world, currently finding any excuse not to crack on with the recovery session I have promised myself I will complete at some point this morning.

So, instead I’ll tell you all about yesterday’s marathon. If you haven’t got time to read on, this pic tells you all you need to know: three medal wearers with big smiles and a bit of a suntan: 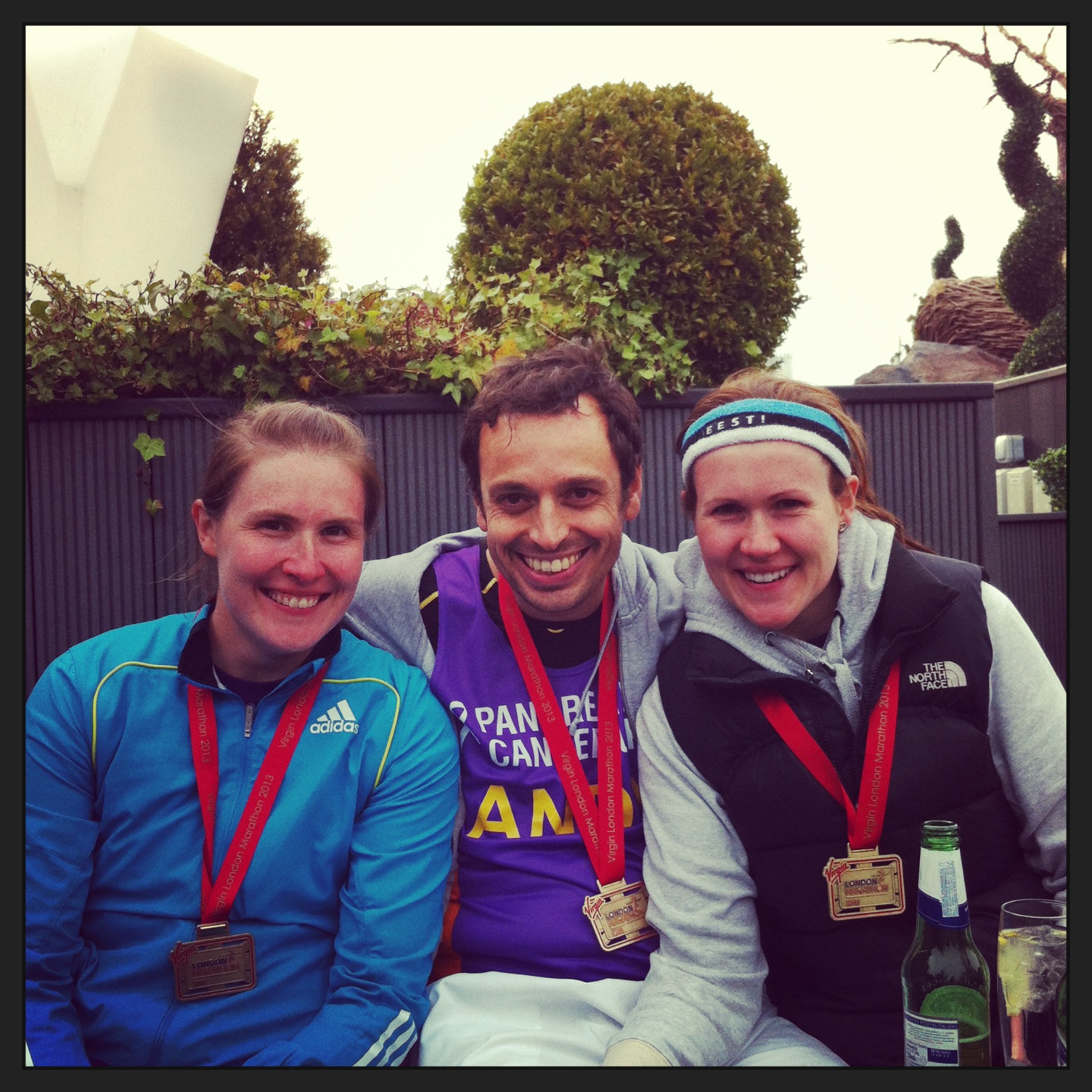 For a bit more…

It was a glorious day. You couldn’t have asked for better. Not in the least bit similar to the conditions we’ve trained in, but hey. Striding through the London streets in the sunshine is always awesome. Add to that every street lined with thousands and thousands and thousands of folks yelling your name, it’s even better.

This was my second London marathon and it proved just as incredible as the first. It’s not easy to get a place in London but if you ever consider running a marathon this is truly the one to try and get into.

This year’s best bits for me were undoubtedly The Games Makers who had regrouped and formed an awesome support crew at mile 22 – I couldn’t help but cheer and whoop at them! It was like being transported back to the Olympic Park all over again. It felt awesome. The steel drummers that buoyed me along last year, were in place once more and the slightly thug-like lager swilling chaps just after mile 21 with their “Roof, Roof, Roof” inoffensive chants. A special shout out for Run Dem Crew who totally own mile 21 with their cow bell ringing, epic cheering, high fiving and downright coolness. Seeing family and friends you always fear you’ll never spot is totally uplifting. A special shout out to Swerve, Wilbur, Rowlo, J-Mo, Jim, Margaret, Hels, Steve, Alice, Sinead, Noel, Dave, Laura, Paul and a big apology if you spotted me and I didn’t see you!

Sis and I were in the same starting pen and ran side by side from the get go. We said few words but exchanged knowing looks and metaphorically held one another’s hand through probably the toughest emotional spot of the London Marathon, the crossing of Tower Bridge.

For those that follow this blog you’ll know I was carrying an injury for this race.  And between mile 17 and 18 I got to know about it. My glutes got tighter and tighter, my back was twinging and I know (with four marathons under my belt) this wasn’t the kind of pain usually associated with the 26.2 mile monster.

In short, I freaked out a bit. Our backs are precious things and long term damage there doesn’t bear thinking about. I probably would have been ok, it probably was simply a lack of strength. Looking back at a calendar (given my Mum’s death, illness then the injury) I’ve probably done a grand total of 5 complete weeks of training for this event.  There’s a lot to be said for session after session of heavy squats and deadlifts that fire you up for a 42k effort. Without them I was at a bit of a loss.

So just before the 30k marker I told Sis to head on. I didn’t want to hold her back, she was digging deep, had tonnes to give and has trained really hard for this. I then had some quick decisions to make – should I make my way to St John Ambulance for some massage in my glute and hip (no, high risk, I thought, may never get going again); shall I drop to a slow jog (no, soul destroyingly painful and doesn’t get you anywhere). So I walked. Quickly. Just as I would on my previous 2.2 mile route to work which used to take me 40 mins. I visualised the remainder of the course would be just shy of two round trips of my daily commute. Easy. And I loved it. My back stopped crunching, the sun was beating in time with the drums, the crowds were going wild for this power walking mentalist. I was not worthy.

And I made it. I did it for Fi. I crossed that line (I’d worked up to a bit of a jog by then) and felt blessed. 6 weeks ago I would never have thought that was possible. All this week I’ve been apprehensive about whether my injury would survive the course. But it more than did. This marathon is almost certainly my last. It was, without doubt, the most special one.  Every single stride meant so much.

My ‘worst’ time, has become my proudest time

How to recover after a marathon