There are 13 comments on the post! Want to get involved in the chatter? 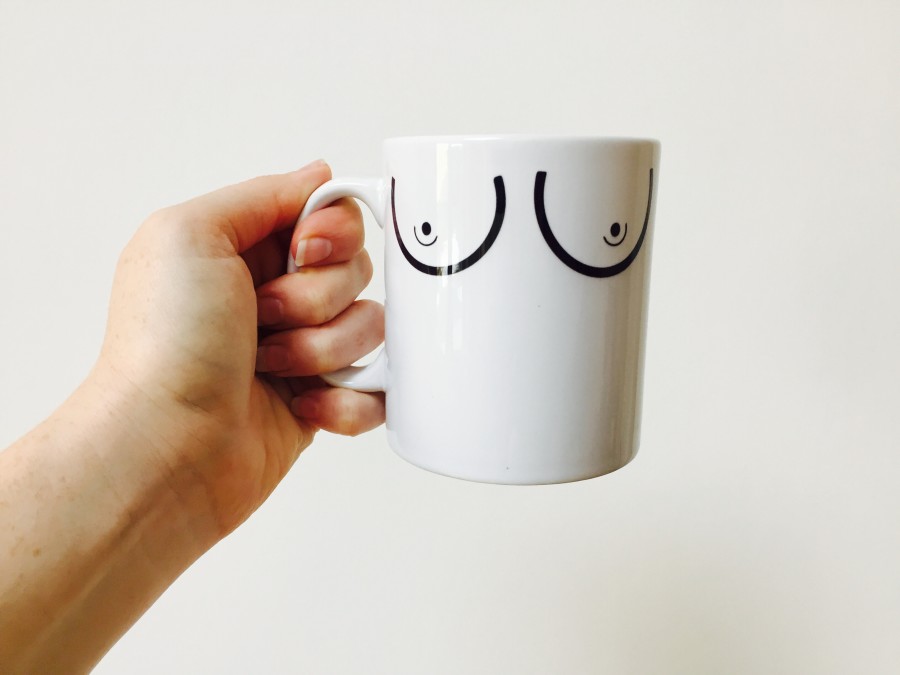 Before our baby was born we attended two breast feeding workshops – one as part of our NCT course and one at the hospital where we would have our baby. In between the knitted boobs and videos containing a lot of nipple, I spoke with many friends.

No one ever made out breast feeding was easy. Both mine and my husband’s vocabulary had extended somewhat to fully understand the meaning of a good latch and the job of the areola. We both became aware of what our respective roles in breast feeding would be and that we’d of course want to breast feed our baby.

In the recovery bay following delivery once sweet tea and buttery white toast had been administered (the best of all the ‘drugs’ I was given during my entire stay) a maternity care assistant came by to help begin breast feeding. Before long my boob was squeezed and guided into Ffion’s mouth although she wasn’t quite sure at this point so we gave it a little while longer. Another midwife came by to say “there’s been mention of flat nipples, but that doesn’t matter. Babies don’t know any different so they will work with what they’re given.” This midwife was the first to pick up on Ffion’s slight tongue tie too.

It wasn’t long before we were on the ward and it was time for Andy to leave us for the night. A very drowsy Ffion hadn’t yet fed so the hand expressing by the midwives started, with little drops of liquid gold finding their way into my baby’s mouth with a syringe. The hand expressing was soul destroying yet reassuring, such a comfort to know my baby was having what she so desperately needed yet a midwife handling my breast every three hours hadn’t featured in any of the new parent manuals I’d previously wasted time reading.

Things were still like this the next day so I asked to stay in hospital an extra night to be sure we could head home as a properly feeding team.

I genuinely don’t remember that first night at home. That and the second night are all perhaps an intended blur. We definitely slept in very short shifts and we had the baby with at least one us and not in her crib. I remember far more vividly the first midwife visit at home. “My you’re bruised and that’s a sizeable episiotomy” set the tone for what followed. Ffion dropping 10.7% of her birth weight required an “urgent feeding plan” [apparently]. Feeds every three hours, twenty minutes each side, ten minutes expressing each breast and two formula top ups.

Andy left at once to come back with all the things I’d optimistically decided not to buy during my pregnancy – bottles, a steriliser, Hipp Organic formula. The midwife observed our feeding and called me out for being incredibly tense and too soft at not keeping my baby awake as she dosed off after two or three small sucks. It was nearly 6 days before my milk came in.

The insane creek of the hand breast pump. The arm ache. The total absence of any droplets in the bottle. It was painful. The morning following this first day of pumping my breasts were hard, disfigured and, I later learned, full of blocked milk ducts.

The feeding plan brought with it additional anxiety. Insane effort to keep my baby awake for those twenty minutes each side. One hour on duty, two hours off I was told. But I was often terrified of those two hours coming back around and whether any of this was going right.

48 hour weigh ins confirmed a big initial gain (of course, thanks to the formula), then a drop, a static, several small gains. Nothing as it apparently should be.

Cardiff has some incredible NHS breast feeding support groups and we attended our first one when Ffion was just a week old. We sat each week and the same problems continued to arise and intensify. Each week I’d report agonising length of feeds and a very sleepy baby at the breast and ongoing issues around weight gain.

I was supported with tips and tricks all of which we attempted to implement – change her nappy to wake her, tickle her feet, rub the palm of her hand, take off layers of her clothes, take her off the breast. Repeat.

In week 4 I met the head of the workshops and infant feeding coordinator who was truly brilliant. She was devastated to hear of advice my midwife had given me around changing the times of the second formula feed. 6am had been suggested (previously bottles were given at 10pm and 1am but not entirely drained, hence greater space apart to try to get the bottles finished). In solving one problem (all the formula got drunk) our baby was missing out on the best feed of the day with my milk at its richest and in turn my (already struggling) supply taking the hit!

When you’ve not breastfed a baby before I’ve been quick to learn how totally clueless you are. I was in the dark on supply & demand, ‘ideal’ lengths of feeds, draining the breast wherever possible and giving a newborn however much they want, when they want it. Graduating to an electric pump made expressing more feasible but the most that ever came off was 50ml at 2am one early morning.

As our baby got older the length of feed got agonisingly longer. In fact, it was relentless. When our baby wasn’t attached to the breast she was crying. But not grizzling; actual distress, dissatisfaction. Until you’re a parent you’ll never understand the ‘hungry cry’ but I’d describe it as splintering. Your body breaks into a million pieces in a tenth of a second and you want, whatever the circumstances or consequences, to feed your baby immediately.

I’d read so much about cluster feeding and resigned myself to this being how it was. Friends and family would visit to keep me company but not be able to ever hold our baby who was permanently attached to the breast. Anything I wanted to do – go to the toilet, get a glass of water, desperately grab something to eat would result in crying. Hungry crying. That soul shattering sound. On days when I was going out of my mind, I’d put our baby in the pram for a walk where she would scream for the entire duration.

Evenings from 4 weeks were far worse than day times although thank goodness I had my husband for company / sanity preserving. We went through screaming at the breast, a baby thumping my breast with her fist and distress from both of us when pre 9pm my breasts were soft, fleshy, seemingly totally drained with nothing more to give. Yet our baby would furiously attempt to latch like an angry, rabid dog. I felt so helpless.

At the end of her fourth week the team at the breast feeding work shop agreed to snip Ffion’s tongue tie and I had such hope for this being the silver bullet and the answer to the long, sleepy feeds that were clearly offering minimal sustenance.

On Ffion’s fifth week birthday we said good bye to my husband for work and sat together and cried; the pair of us. As Ffion tried so desperately to get what she needed, confused and nibbling on my nipple like a squirrel I shouted “what the hell are you doing?!”, yanked my breast out of her mouth and broke down into further floods of tears. I still worry now if she’ll remember this outburst. Of course she won’t, but it terrified me. I never want to feel this distressed and angry around my baby again.

The next day we headed back to our weekly workshop where we continued to be so brilliantly supported. A student midwife sat with us and observed once again the perfect latch and the hour long feed of 30 minsish each side that followed. With Ffion seemingly sleepy and having had her fill we sat briefly before it started: the licking lips, the hands in the mouth, the beginnings of that dreaded hungry cry. I had a carton of formula and bottle in my bag. By means of an experiment I tipped all 200ml (7oz) into the vessel. The poor thing drank the lot.

I’ve cried so many tears for so many reasons. Feeling so constantly conflicted. So desperate, so keen to want to breast feed, having little to no idea how to make things better for both of us. I was sweating fengugreek and Becks Blue, doing as much as I could to boost my supply. Imagine being a nutritional therapist in training and knowing all I do about the super power that is breast milk and not being in a position to seemingly give enough of this to my baby.

That 7oz bottle was a turning point. A final realisation we’d need to find another way. And now we combination feed in a way that suits us far better. Far more formula, but doing everything possible to hold onto my supply in the process, feeding in the middle of the night, the very start of the day and throughout the evening. I collect every drop I can like a mad woman and die a little bit inside when I’ve not worn my breast shells in the middle of the day and the pads are drenched. I’d wring them out if I could. This might not be “right”, it might not work out for long but since being more satisfied our baby is a different person.

I realised how silent I’d been in her company when we started talking to one another so much more. The day ahead, when Daddy was coming home, the inane rubbish we’d occasionally subject ourselves to on TV; we started to have little chats about it all. Our baby has been settled enough to lie on the play mat, merrily kicking her little legs and throwing around her ever stronger arms. She smiled for the first time; at me, her mother, who has felt just so much better. I can cuddle and cradle a satisfied baby in my arms to sleep. It’s hard to believe it’s taken six weeks for that to happen.

Breast feeding is truly incredible. And there have been some beautiful feeds that we’ve shared together this past six weeks. Beyond the nutritional wonder of breast milk there is no warmth and love like it. Her tummy against my skin, her tired cheek resting to sleep on my breast. Our moment, her Daddy by our side, sometimes leaning on my shoulder.

Perhaps I set out with unrealistic expectations. A commitment to aim to exclusively breastfeed for a year despite telling myself “if it doesn’t work out I’ll cope with formula feeding”. Why couldn’t I just settle for taking each feed at a time. Not eating enough, worrying too much, it probably all took its toll. But who knows, next time (I’m assured by parents of multiple children there is indeed both the time and inclination to procreate again…) things might be different having learned so much this time around.

Have you breast fed your baby? How was it for you?