There are 6 comments on the post! Want to get involved in the chatter?

When the lovely folks at Foodies 100 asked me to write a guide to a healthy (ish – no one likes a kill joy, eh?) Christmas there was no doubt that dear Brussels sprouts would feature.

These fellas are the unsung heroes of the festive season. I’m a huge fan of them roasted in coconut oil with a bit of chopped bacon. Cruciferous vegetables of the cabbage family contain glucosinolates; important phytonutrients for our health because they are the chemical starting points for a variety of cancer-protective substances. Latest research shows Brussels contain more of this brilliance than the green leafy poster child that is kale. But declaring your love of kale is as cool as it is to turn your nose up at the humble Brussels and push him round your Christmas dinner plate. Especially if you’re my little (28 and 3/4 year old) sister who wrote:

“I HATE BRUSSELS SPROUTS. Always have and always will.”

It’s like an annual war of attrition tradition she’s determined to uphold. Even now, at nearly 30, we negotiate with her desperately to allow just one to grace her plate. It’s always left untouched. 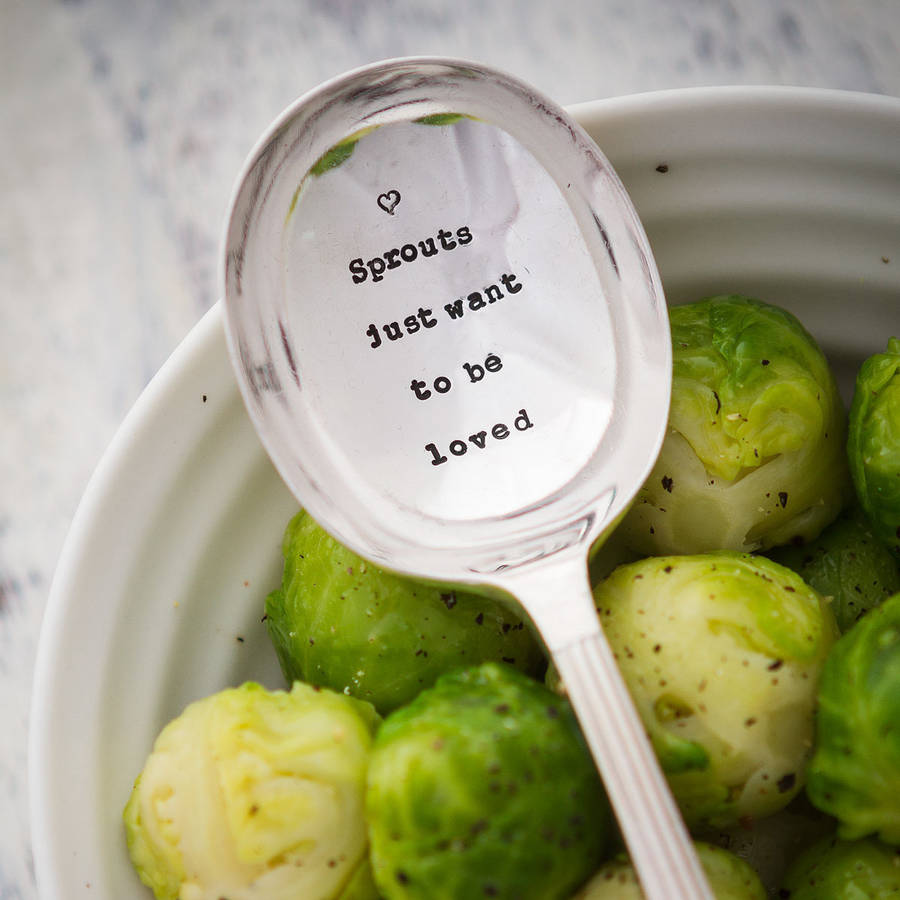 Photo credit: Not On The High Street

When I attended a recent Ocado kids’ tasting panel there were no sprouts put through their paces but it was rather fascinating to understand more about the likes and dislikes of little people – take Lola who I met, featured in the vid, who will “Never, ever eat a tomato”. Strong words – despite devouring the tomato (don’t tell her) pasta sauce ;-)

Unsurprisingly Ceri’s got it covered: “I love them roasted, mostly. In fact, made a salad with them today. Not so keen on them boiled but I’ll eat them cos, ya know, it’s Christmas!”

Lindy’s Squidge aged 8 is “being slowly converted to [Brussels’] deliciousness and prefers them shredded, sautéed with pancetta, olive oil and tossed with craisins and walnuts. Her love of pancetta means she’ll grudgingly eat a few!”.

The Heath family are sprouts super fans! Lucy says “I love them. I even have a Pinterest board dedicated to my love for them ;) I like them best cut like a onion in slices, on a baking tray with a hint of salt, sugar and a drizzle of soy sauce and olive oil and roasted in the oven until caramelised around the edges. We all eat them like mini crisps!”

Naomi who I met at the tasting panel even has an emergency supply: “I love ‘mini cabbages’! Keep them in the freezer all year round for an emergency green fix. When they’re fresh I like to cut them in half and grill or fry them, so they get a bit crispy. Happy to scoff them all pure with just black pepper and oil, or fry them with pancetta. Love love love them!”

And I also tracked down some recent converts:

Laura “hated them until Henry’s mum made them and they weren’t soggy! Jack (5) loves them!”

Sara was a hater until she had them pan fried with Pancetta. “I can’t imagine eating them often. [A Spanish restaurant] did a brilliant tapas based on sprouts last Christmas and in the way only the Spanish can they tasted amazing and meaty and moreish. But oh! The stink!”

So who wins the award for the biggest sprout lover? Probably George’s Mum… “I come from a family of sprouts lovers! My Mother has been know to put them in a sandwich. I have been turned on to shredding them in a processor and then stir frying them with a bit of coconut oil or butter if I’m feeling wild. Long live sprouts!” says George.

Where do you stand on sprouts? Love ’em or hate ’em…?

FISH IS THE DISH – PART TWO