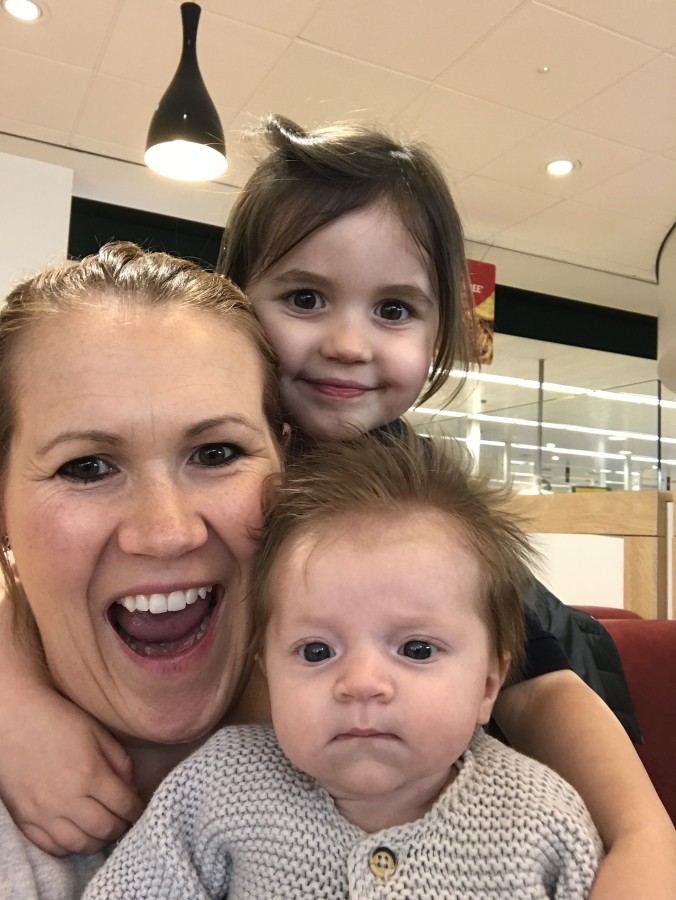 The heady adrenaline highs of giving birth in my bathroom have carried me through a lot of this fourth trimester. Most days, I could have wandered through the park, waving my arms in the air as ‘This Is Me’ belted out from my head phones. Only the small matter of needing to push the pram held me back; that, and knowing a lot of the locals.

It took a little while to warm up mind you. After my in laws left following a weekend long visit when B was just days old I was hard pressed to get a hold on a very trembly bottom lip and all of a sudden my contact lenses playing up… Don’t leave us… You can’t go 130 miles away. What on earth are we going to do with two children?! Especially the utterly savage 3 year old who was relishing 4:30am starts and a determination to ‘break us down to dust’ on the regular…

But it was only us she seemed to have a problem with. Her baby sister could do no wrong. It was a blissfully idyllic first meeting for them as I sat on an incontinence sheet on the edge of our bed, she bounded into my arms after a day at nursery and looked into the previously empty just 10 hours before crib at a very hairy sleeping bundle. I could feel excitement and love surging through her body as I held her tight. She wanted to share everything with her from the beginning – including an uncooked jacket potato that she reached for and tapped furiously on her head at around day 5…

With hindsight, a month of full time nursery for her might have been a mistake. But knackered parents deserve two weeks of paternity leave predominantly in bed, watching Greatest Showman uninterrupted. Feeding, cooing and generally appreciating the latest addition. After those initial two weeks I had fully expected to be nursing a wound from a planned c-section and wanted to do all I could to get a handle on feeding as much as possible.

But unfortunately, on that front, history repeated itself pretty quickly. With plummeting weight and no soiled nappies bar the initial meconium for B, it was clear something wasn’t quite right. Combination feeding filled those nappies and soon more and more formula helped our littlest creep back towards her birth weight. It was sad, yes. I had hoped dedicating every minute I could to feeding for those first two weeks with Andy off work would have made a difference this time round but alas. It’s the not knowing that still does hurt the most. What is it that means my supply is simply non existent?! That I won’t ever know, but this time it was much easier to acknowledge I’d tried, given it everything and B wasn’t going to lose out on any love being a formula fed baby.

Whatever she was fed, however, it was quick to see the signs of silent reflux creep in very early on. Sneezing so much (within hours in fact), delayed swallowing in her crib. Never. Ending. 4am. Hiccups. BRUTAL. It was dismissed by midwives as nothing to worry about, but oh I knew. Sure enough week 5 and the little love is puce in the face most of the time and the weekend before she turned 6 weeks in so much pain she can’t even stomach a sip, all the while doing that splintering hunger cry. Thankfully we were able to get on top of that pretty quickly and whilst meds for one so young always seem far from ideal there didn’t seem to be a great deal of other choice – and they worked!

With that first month of full time nursery done we found a far happier groove to suit us. Days split between two childcare settings reunited us for (all be them manic) pick ups, drop offs and 3pm until bedtime together as a trio. Morrisons Cafe, I owe you everything. Library trips, sing alongs, skipping through parks and general, beautiful chitter chatter that I want to bottle up and remember forever. Mondays it’s a treat for the eldest with swimming lessons and on Fridays I recover from it all with a quiet day, just B and I. It’s much needed but still, three months on there’s all manner of conflicting guilt as I unclick the buggy board and head out, in between 17 thousand loads of laundry, with just one of them.

One isn’t an angel and the other sent by the devil. One of my children is 3 and a half and the other is just three months. Both have very different needs and ways of expressing them. Mother Nature hard wires you to deal with a crying baby, stat, and comparatively that is pretty straightforward. But the rule of tired, hungry or bottom change three no longer applies to a far more complex little human. I’m a shouter not a crier and I hate myself so, so much some days for the bellowing. I know the eldest is often bearing the brunt of my tiredness, my irritation at the relentless chaos and volume. So much would probably wash over me if the demands of a family of four weren’t weighing that much heavier these days.

I’d be shouting far more if I hadn’t put in place some reinforcements in lieu of any local family support. Tidy Kitchen have delivered us incredible meals, we’ve traded children in gym car parks to fit in essential endorphin drenching work outs, we’ve kept our cleaner and dear friends have sent vouchers and cash for blow dries so I feel ready to face the music with a barnet and a bright red lip to feel proud of. I’ve walked miles at every opportunity, could count on one hand the number of nursery runs done by car. Heidi at The Parent & Baby Coach has been a sanity saver and helped us get to know our second baby so much more quickly. We’re tuned to her needs (and ours) far more than we ever were with her elder sister. It’s been gentle, routine setting brilliance and I will recommend Heidi time and time again.

I remember counting down nearly every waking moment of the first three months of my eldest’s life because so many people promised me “it gets easier”. But as a first time Mother it’s all so raw, utterly discombobulating and generally unsettling. My eldest child will forever be my greatest accomplishment on account of her presenting the greatest challenges. We’ve never, ever done any of this before; at whatever age she may turn. I’ve spoken before about the intensity of the love we have for one another and how we always, somehow, manage to go to bed at night with any cross words forgotten. My littlest taught me what instant, bowl you over love, feels like. When I picked her up from the bathroom floor (I know, I know…) I couldn’t even see her face, it was just her back, her bottom, every ounce of her being that nearly caused me to faint from the adoration. She gives love freely and fits in so perfectly. The baby I’d convinced myself we’d be ok without, because of a series of our own struggles. She will forever be the one that helped us make peace with so much. We owe her everything.

I mean, she still provides us with those textbook tests of witching hour, a love of white noise which I’m sure is giving us all tinnitus and crikey that first round of jabs… you go in there all Smuggy McSmuggerson ‘oh, I’m a second time Mama with my baby’s legs out ready and the Calpol syringe locked and loaded in the pram’ but… FML… that scream. That scream is just as haunting as I’d admittedly forgotten it was back in 2015.

Life is noisy, chaotic and sometimes the “hang on, Mama’s coming… two minutes… just give me a minute…” grinds me down and down and down but… we’re doing this. We’re the family of four I was never quite sure we wanted to or could be. But it is beyond brilliant and the trickier days are absolutely outweighed by the bloody brilliant ones.

We’ve rounded off this fourth trimester with a vasectomy, a first postpartum period and chunks of hair falling out so, four month sleep regression, ‘look out ‘cos here I come’…