(or How I Learned To Stop Worrying And Love The Baby) 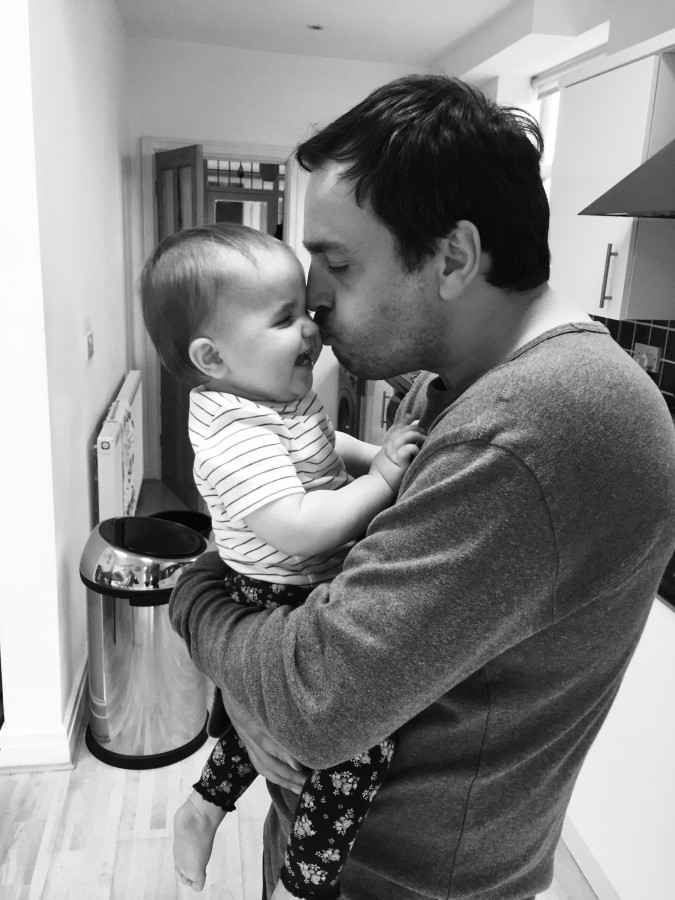 Sometimes my rather wonderful husband, the doting Father of our child, pops up on this blog with the occasional entry. Even in just a few posts he’s established a reputation as a better wordsmith than I with even better gags to boot. This post however, is unquestionably his best to date and one I am so proud to share. Over to him…

One year ago my life changed forever. Dramatic huh?

After a day during which I added very little value other than setting a new PB for longest time sitting on a yoga ball my amazing wife gave birth to our daughter. My perfectly honed skills of wise-cracking and general knowledge recollection were rendered useless, and I took a short term vow of silence (albeit prompted by Ruth’s insistence that I shut up). Getting our little girl out was bumpy. It was dramatic. It certainly wasn’t how we’d planned it, but thanks to the wonderful team at UHWC we all made it in one piece.

A short while later, once the drama was over, Ruth and I found ourselves eating toast and staring at a little pink scrunched bunch in the hospital-supplied plexiglass crib. It felt like being in the reptile house at the zoo, only the specimen was warm blooded and we weren’t allowed to scuttle away when it gave us a fright. The next two days we received such amazing care. Ruth and little Ffion were being looked after, and I got regular coffee breaks and the chance to stretch my legs around the hospital grounds. Due to visiting rules, I had to head home at the end of each day but even this wasn’t too bad. It was certainly a wrench leaving my little family unit behind, but it also felt like a chance to charge my batteries before the days/weeks/months/years ahead and the last little bit of calm before the storm.

And my goodness what a storm. No sooner had Storm Ffion arrived at home before I was all at sea. I bumbled around like a combination of Mr Bean, Inspector Clouseau, Frank Spencer and Homer Simpson with all of their fecklessness and none of their endearing qualities. Before our baby arrived I’d read a lot about the high risk of mental health issues for mums following the birth of a baby, and was on red alert to look out for any signs in Ruth. What I’ve since learned is that new dads are just as susceptible. According to research from NCT, more than 1 in 3 new fathers (38%) are concerned about their mental health. It’s fair to say that I was firmly in this bracket. For 48 hours I was in bits, constantly on the verge of tears, millions of doubts, fears and insecurities running around my head, and all the while my wife and daughter needed me to step up to the plate. There’s a certain painful irony to the fact that crippling worries about not being able to look after my family had rendered me incapable of doing so.

I’ll be forever grateful to a good friend and fellow recent dad for some sage advice that helped me get my sh*t together. He told me that the sooner I accept that my own failings will prevent me from being the perfect dad the sooner I’ll be able to get on with doing the best job I can. And that’s all anyone can ask really. So that’s what I’ve done since. Don’t get me wrong, the blind panic is a constant companion, I’ve just learned to handle it in the same way that I’ve worked out how to ignore the smell of dirty nappies. Sh*t happens, just deal with it and get past it as quickly as possible.

Now our beautiful Ffion is one, and makes me proud every single day. Proud of the new things she sees, the things she learns, the way that she lights up when she sees me after a day at work, the way that she shouts my name with glee (and sometimes anger). But she also makes me proud of myself. That I played a part in her creation, that I’m helping to shape her life, to guide her. That I can make her laugh, can understand when she wants some food, or a sleep, or when she just wants me to leave her alone. I’m proud of the fun times we have spent, just me and her, when Mama has been studying. Proud that we’ve both lived to tell the tale. I’m also proud that I had the wisdom and foresight to marry such a single-minded and inspiring role model for her as Ruth. Pride almost seems too small a word for how I feel about what Ruth has achieved this past year. To have raised our baby whilst eating the nutrition world for breakfast is a feat of staggering proportions.

So well done us. My family unit. My team of 3. I’m certainly not forgetting the family and friends that have helped us along the way. I also know that we’ve not achieved anything that hundreds of millions of families haven’t done before. Yet I’m seizing this moment for us, for me, and to stick two fingers up to anxiety.