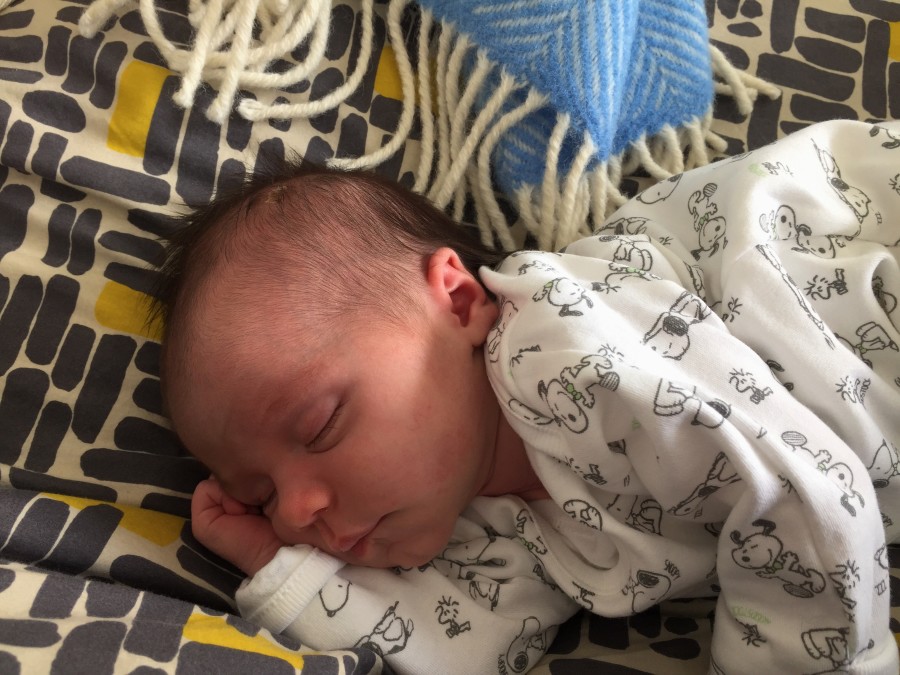 Guest blog by Andy, the hottest new chef in Cardiff.

When Ffion Crisp arrived at her new home on Wednesday 9th September, two days after her fairly dramatic birth, the food chain in my household was forever altered. With her mother dedicated to ensuring that the baby was eating enough, it came down to me to step up to the (gas)mark when it came to feeding the adults. Given that my kitchen skills are, at best, questionable I needed a fair bit of help to a) ensure we didn’t die of starvation; b) ensure we didn’t die of food poisoning and c) ensure I didn’t die at the hands of my hangry wife.

My original shopping list, which included items of questionable nutritional value such as a giant box of Coco Pops, loads of fish fingers and a massive bag of oven chips, was swiftly dismissed by my wife. Apparently “Nutritionists-in-training shouldn’t be eating spaghetti hoops every day” – who knew? The fruit and veg levels within our shop would need to increase dramatically, in line with my trepidation as to how I was going to pull this off.

Luckily Ocado had my back, with my sleep deprived eyes unable to believe themselves when I stumbled across the dedicated New Parents shop. The healthy and convenient choices made cooking seem a little less daunting, and ensured that a wife who was going through the physical and emotional wringer would still be able to enjoy a proper meal despite her feckless husband.

It was a challenge not to get too trigger happy, and remain focused on some basic rules that I had set myself:

It’s fair to say we were lulled into a false sense of security on day one, when a sleeping baby meant that we were able to enjoy Thai Green Curry for two at the dinner table. I managed to follow the simple instructions and knock together something half decent. Compliment number one logged, I realised that this parenting lark was going to be easy.

That would prove to be something of a false dawn, as the next few weeks saw Ffion wearing a whole lot more than the lovely baby clothes we had bought her. The yawning chasm that seemed to have developed between mummy’s dinner plate and her mouth, filled by a feeding baby, was making the transition of food tricky. We had tomatoes on her nose, water on her head (didn’t even flinch so transfixed was she by my wife’s breast!) and more spilled porridge than a throw down at the Three Bears’ house.

Yet I continued to churn out the culinary hits regardless of how they were being received, like Cliff Richard at Christmas-time. Other highlights included scrambled eggs with salmon and rocket; spinach, feta and red pepper quiche with salad and, my personal favourite, chicken in white wine sauce with some roasted vegetables (god bless you Charlie Bigham, whoever you are!).

No matter how tired we both were for that first few weeks I was mindful that Ruth needed to keep eating to keep her strength up. Whilst she was force-feeding Ffion, I was doing pretty much the same for her. I was really pleasantly surprised by how quick and easy cooking could be when you set your mind to it and were a bit organised. We’d included a fruit, veg and salad box in our order, and the contents lent themselves to many different meals. The sweet potatoes, aubergine, peppers and courgette made for a huge tray of roasted veg which did us well for a fair few meals, whilst the inclusion of a pineapple made for a bit of comedy given how we could have done with a load of them when we needed to kick off the overdue labour merely days earlier!

Ffion is now three weeks old and we’ve all made it along okay so far. Her mum has done a brilliant job of keeping her fed (aided wonderfully by me as her water-boy/pram pusher/driver/shopper) whilst my attempts in the kitchen have served us pretty well. Don’t get me wrong, I certainly won’t be suggesting that I take over the family catering but I wouldn’t be averse to making Dad’s Dinners a more regular occurrence.

Special thanks to the team at Ocado who kindly stocked our fridge with all the ingredients for Dad’s Dinners during these early weeks.